Is procrastination really a thing? 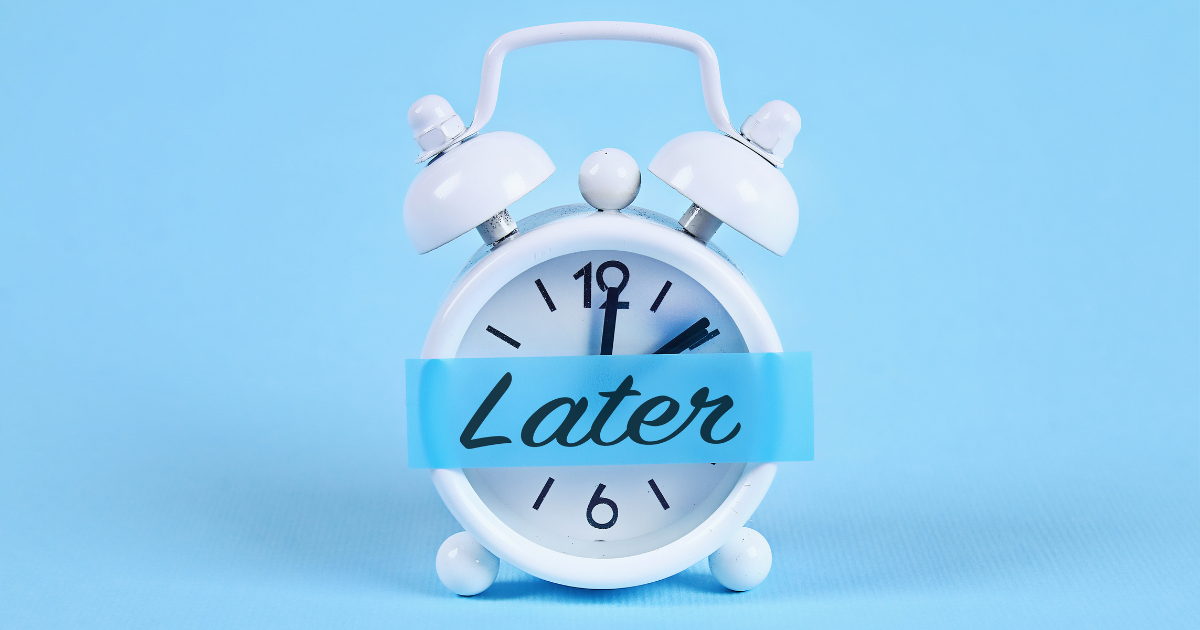 How do you feel when people say, “Just get on with it”, “You’ve got this” or “Never put off till tomorrow what you can do today”? I get annoyed, because if it was that easy then I would get on with it, trust I’ve got this and get going today!

Procrastination is not a modern concept. We can find references to procrastination dating back to the Greek poet Hesiod, circa 700BCE, who wrote,

“Do not put your work off till to-morrow and the day after; for a sluggish worker does not fill his barn, nor one who puts off his work: industry makes work go well, but a man who puts off work is always at hand-grips with ruin.”

Talk about a guilt trip!

The issue as I see it is that Hesiod didn’t consider why the worker was behaving sluggishly or putting off his work. If the poet had considered this, he may have come up with a solution to help those folk avoid ‘ruin’.

As a result of my experience working in the area of mindset I no longer believe that procrastination is about time-wasting or lack of willpower. I’ve also stopped subscribing to the idea that people who procrastinate are lazy.

Psychologists are starting to recognise that procrastination is a symptom of much deeper things. At the root of this behaviour, as with all our behaviours, are a bunch of beliefs, emotions and thought patterns. So when a client tells me they want to overcome procrastination I will start digging to find out what is going on. I will ask questions such as:

It’s also useful to ask the client what they think is going on. Sometimes the act of verbalising unspoken thoughts is enough to get to the bottom of the issue and help the client make changes. Other times we need to do deeper work on the issue. We need to find the beliefs behind the behaviour, and their origins. Then we reframe the beliefs driving the unwanted behaviour. For that, I use RTT, hypnotherapy or the Lefkoe Belief Process.

Procrastination may be driven by several limiting beliefs. Beliefs such as, “I’m not good enough”, “I’m a failure”, “The things I want are not available to me”, “ I’ll be rejected”, “I’ll be judged”, and “I won’t succeed” or “I won’t cope with success” and “I’ll get bored ” (🤔 Hang on…when it comes to my taxes that last one IS true!)

Recently I needed to do some work on myself. I wanted to get to the bottom of why I was avoiding promotional work on my business. Having changed my coaching direction and services it was time to get the message out to the world and my mailing list. Time after time I’d promise myself, “this week”, “today” and time after time I’d found myself prioritising other tasks, putting “it” off to tomorrow, urgently needing to binge watch the whole series of Battlestar Galactica (again) or giving myself ‘time-out’ to recuperate – it’s exhausting coming up with excuses all the time!

Eventually, I did some work with a fellow RTT therapist and discovered I had the beliefs, “It’s dangerous to be noticed”, “People won’t understand me” and, “Even if it’s available, it’s not available to me”. I’ve zapped those suckers now, and I’m enjoying talking publicly about my new services as a coach and hypnotherapist.

Next time you’re dragging your heels on a task, prioritising other things or playing the avoidance game, pause and ask yourself:

Then go work on the obstacle, or find someone who can help you. Sooner or later you’ll find yourself easily and effortlessly doing what you need to to achieve your goals.

I’d love to help you overcome procrastination. Why not book a free call to discuss this further? Let’s get proactive!